The Wondershare DemoCreator is an excellent software application for video creators and educational purposes. The product is at once advanced yet easy-to-use. The intuitive user interface and the abundance of useful features make the DemoCreator one of the foremost choices among creative individuals and commercial organizations.

How to Start a New Project?

If you do not know how to use a video recording or editing application, you need to worry. DemoCreator is easy to use and navigate even for beginners. The following is a general guide on how to navigate the DemoCreator app and use its features to record, edit, and share videos. Once you have downloaded and installed the app, launch the app and sign in to your registered account to take advantage of all the great features of the app.

Once you launch the app, the first thing you will see is the home screen of the app that lets you access your recent projects, start a new recording, or edit videos. I was pleasantly surprised by the ease of use of such an advanced software program. Once you open the app, most of the major features and tools are only a few clicks away. 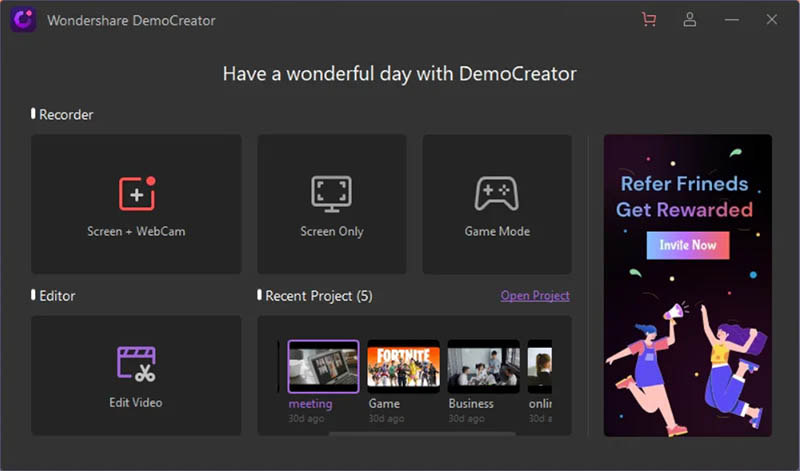 To start a new recording, click any one of the three recording modes on the home screen. You can record screen only or screen plus webcam. There is also the game mode that lets you record your gaming sessions and stream or share them on social media. The top navigation bar allows you to create new files, open, export, edit, and view files quickly. Even more tools and features can be found on the top toolbar as shown in the screenshot. You can access the library, effects, transitions, annotations, captions, stickers, filters, and various other options. 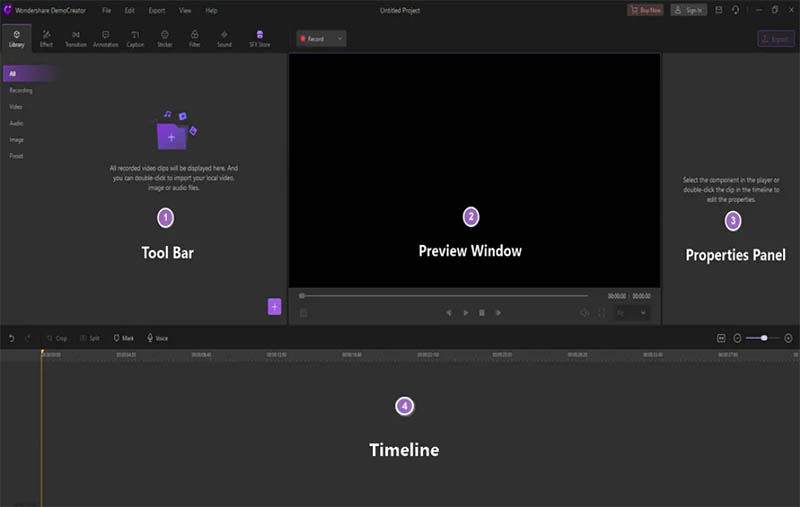 How to Use “Capture Area”?

Note: The Screen Drawing Tool is available only in the Screen + Webcam recording mode. This tool offers several useful functions such as Pen, Line, Arrow, Rectangle, Circle, and Highlight, among others. One of the best aspects of using the DemoCreator app is it lets you write and draw even while you are recording. You can start or stop a recording by pressing F10 and pause or resume a recording by pressing F9.

How to Edit Video Tutorial

To edit a video, click the video editor on the home screen and you will be redirected to a new screen with the preview window, tool bar, timeline, and properties panel. The Preview Window, as the name suggests, lets you preview your project and decide whether to make any changes before final saving or sharing. You can pause, rewind, and fast-forward your preview video file by using the control icons under the preview window. Use the Timeline to assemble the effects and transitions of your video projects. You can also assemble various media files on the timeline, including photos, audio tracks, and video clips, among others.

How to Split a Video File?

DemoCreator even allows you to split a video file and edit the split video files separately. To split a video, place the playing indicator over the clip that you want to split and click “Ctrl+B” or the split icon on the toolbar at the top of the screen. You can also right-click a clip and select “Split” to split a file. After you have finished editing your media files, you can export them as an AVI, GIF, MOV, MP3, MP4, or WMV file. You can name your files and choose a location where to store your exported files. You will also be able to adjust the video resolution, bitrate, frame rate, and other video settings from the export window. 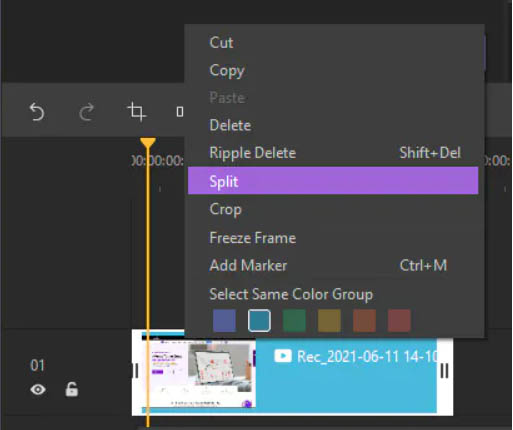 Google Trends is an analytical website that charts the regional and periodic interest in top Google search queries. The result is displayed in the form of a graph and it helps us to understand how a company or product is faring in the market. I used Google Trends to study the interest in “Wondershare DemoCreator” and some of its closest competitors in “ClipDown” and “Vmaker” within the USA over the past 12 months.

Over the last 12 months, the average interest in “Wondershare DemoCreator” has been fluctuating with several ups and downs. Despite the ups and downs, the interest in the keyword peaked quite a few times throughout the last year, including most recently during September 2021. The inconsistent interest in the product can be attributed to the developmental process that the software is undergoing. As the company brings in new updates to the software, the interest will increase in the coming months. 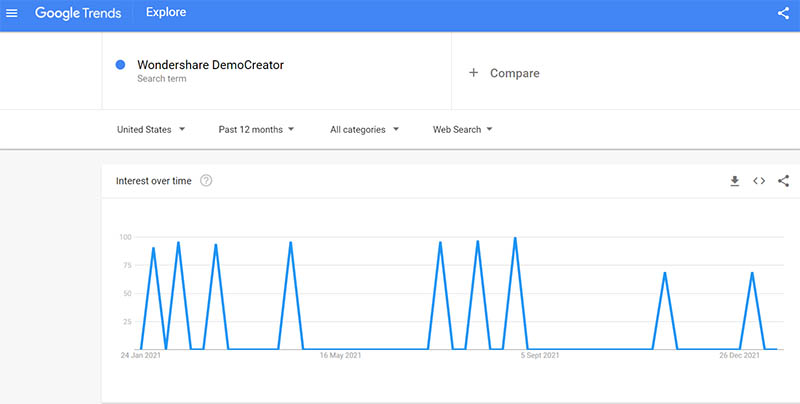 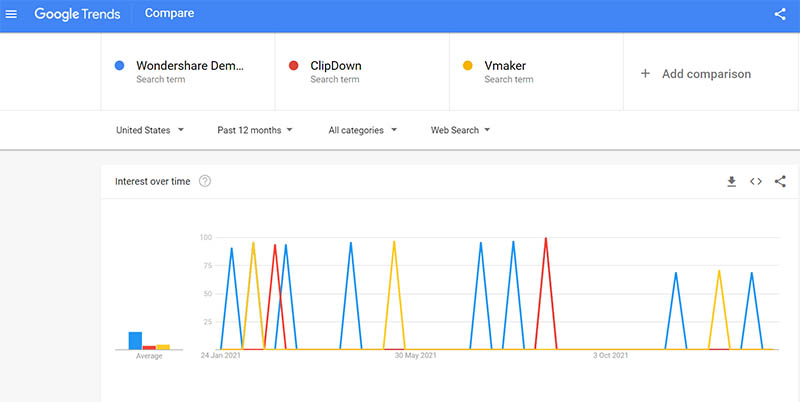 When decoding the Google Trends results, it must be kept in mind that several factors decide the resulting graph that the site displays. Certain factors, including, among others, regional variance, available versions, duration in the market, and upcoming updates may result in unforeseen changes in the average interest in keywords. The graphs and the consequent conclusion we draw from them are subject to change, abruptly at times, and must not be considered as absolute.

DemoCreator has its fair share of positive and negative reviews with the positive reviews far outnumbering the negative ones. To get an unadulterated perspective of the software’s performance and efficiency, I explored numerous review websites, including Trustpilot and SiteJabber, looking for comprehensive reviews from real users.

On SiteJabber, there were 138 reviews of Wondershare and the company scored a consumer rating of 3.56 out of 5 stars from those user reviews. While the majority of the user reviews on this site were positive, there were a few complaints and criticisms from some users regarding the performance of certain software products from the company. As far as DemoCreator is concerned, users seemed to not only be satisfied with the software’s performance but also excited to use and recommend it.

On the other hand, Trustpilot had over 3000 user reviews of Wondershare and the company scored an above-average TrustScore of 3.6 out of 5. As with the earlier sites, forums, and social platforms, there was hardly any negative comment or reviews about DemoCreator. The only negative reviews that I could find on Trustpilot were of Wondershare’s other software products. Overall, the Wondershare DemoCreator has attracted mostly positive reviews from general users till now and is unlikely to fall from the public’s grace any time soon.

Video editing with the Wondershare DemoCreator is a pleasure, to say the least. Not only does the app offer a plethora of functional editing tools but also makes it remarkably easy to access and use them. For example, you can drag and drop media files to the Preview Window or the Timeline from the Media Library. DemoCreator not only offers a variety of tools and features but also makes them quickly accessible and easily understandable. Without any disrespect to other similar software programs competing with DemoCreator, I must note that not many apps come close to the overall sophistication and usability that DemoCreator offers. Not many video editing programs, and I have used quite a lot by now, can balance the number of features and their functionality as well as DemoCreator does.

While the DemoCreator is fairly new to the market, it has quickly become the talk of the tech town, and rightfully so. The only reservation I have about this app is the limited platform support. You can only use DemoCreator on a Windows or macOS device. Such a wonderful software program deserves to be accessible to all users irrespective of your OS. Till then, one can only hope that Wondershare offers DemoCreator apps for operating systems other than Windows and macOS.

Softocoupon.com
50% Off Wondershare UniConverter
Use Deal

$67.96
Added to wishlistRemoved from wishlist 0

$19.98
Added to wishlistRemoved from wishlist 0

$13.99
Added to wishlistRemoved from wishlist 3

$11.8
We will be happy to hear your thoughts