Parallels Desktop 18 For Mac Review: Ready For The MacOS Catalina (10.15) With Over 30 New Features

The latest version of the Parallels Desktop for Mac is here and Mac users have so much to cheer for. Windows desktop users find it difficult to switch over to Mac and even Mac users sometimes feel the need for certain Windows applications which are not available on their Mac computers. The Parallels Desktop 18 for Mac have answered all your prayers. Parallels Desktop for Mac is the most trusted desktop virtualization software for well over a decade and they are out with an improved version which is ready for the yet to be officially released macOS 10.15 Catalina. With brand new tricks up its deceptively long sleeves, Parallels Desktop is here to keep the mantle of best desktop virtualization software for a long time to come. So let’s have a look at what the new version brings to the table.

Use Deal
What’s new in Parallels Desktop 18 for Mac?

A lot!! More than thirty new features have been added to the brand new version which I must say is a bold improvement from the previous version 14. Parallels Desktop 14 for Mac introduced the much anticipated Dark Mode when it released. In keeping with the tradition of introducing a head-turning feature with each new version, the Parallels Desktop 18 for Mac boasts of support for DirectX 11 and that is a massive addition. The previous versions supported only DirectX 10 but the new version 18 can seamlessly run the games that you have been dying to play. DirectX 11 makes running graphic-intensive games, such as FIFA 19, Age of Empires, Crysis 3, Fallout, and the likes look like child’s play. It also supports graphics-heavy CAD/CAM applications like Autodesk Revit 2020, Autodesk 3ds Max 2020, Lumion and ArcGIS Pro just to name a few. Parallels Desktop 18 also supports previous versions of DirectX- DirectX 9 and DirectX 10. To make things better the new software supports DirectX via Apple Metal API (application programming interface) for the first time rather than OpenGL which was employed in previous versions.

The company stated that it has managed to insrease 3D graphics processing by 15% faster and Microsoft Office application startup by 80% faster and bundled a 18 version with 30+ new features. Applaus. Curtain.
1

Virtio GPU absent. Support for a lesser variety of Linux

Windows on your touch bar

A touch bar wizard lets you customize your touch bar as per your whim. Add any and every Windows applications that you may use to the touch bar and make the best of both worlds. The upcoming People Bar from Windows 10, which allows the user to pin contacts to the taskbar, is also made available to this software’s users. Enhanced retina support ensures that the user gets the best possible visual experience.

Installation and Ease of Use 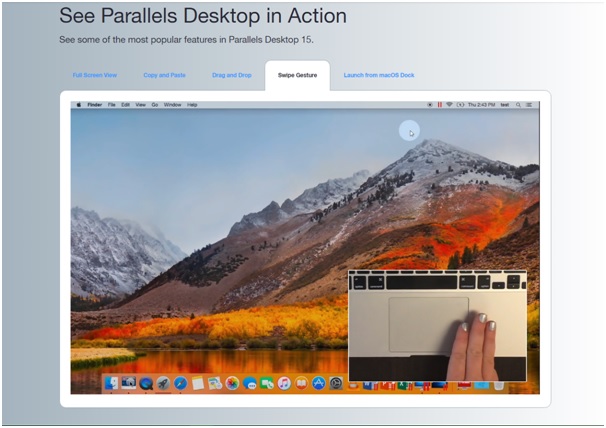 You can now send files from macOS using a Windows email application with just a couple of clicks thanks to Parallels Desktop 18’s support for emailing files from Finder. Use Windows along with macOS without having to restart on your MacBook Pro, MacBook, iMac Pro, iMac, Mac Pro, and even Mac mini. Parallels Desktop 18 for Mac provides the ultimate flexibility since it works with OS X, Windows 10, 8.1, and 7, Linux, Unix, and macOS Server. The setup is as easy as it gets and the software is very intuitive. It will automatically detect whether you need to download Windows or choose your existing Windows, Linux or Ubuntu installation. Graphics hungry Windows applications run without a hitch and with the auto Disk Space optimization you can now save loads of disk space. You can now drag and drop files from macOS to Window screen.

Choose the view that suits your style. You can hide the Windows screen in Coherence Mode and still launch and use Windows Applications from your macOS dock. Office integration allows Word, PowerPoint, or Excel documents in Safari to open in their native Windows app. If you are shifting to Mac from Windows PC then you may prefer the Windows screen to the Mac screen. You can set the Windows screen to occupy the entire screen of your computer. Whatever be your choice you can easily swipe between the Windows and the macOS screen with a simple three-finger swipe gesture on the touchpad. Adding Windows applications to Touch Bar for instant access and easy customization is also an option. With Parallels Access you can now remotely access your Mac from any iOS or Android Device.

Apple Pencil and Sidecar support are much-awaited additions to the previous versions. Windows applications now support the use of Apple Pencil with added tilt and eraser support. You can use your iPad as a second display to extend your Windows applications thanks to Sidecar. Additional support for Bluetooth devices allows you to connect Xbox One Controller, IRISPen, Logitech Craft Keyboard, some smart home apps and smart bands, and much more. You can even play an Xbox game in a Windows 10 virtual machine. Virtual machines support a wide variety of Linux distributions. Parallels Desktop 18 lets you use a sliding mouse, dynamic resolution, and multimonitor support out of the box.

People usually prefer to switch between Windows and Mac apps, Parallels uses the options Unity and Coherence respectively to handle the switching. When these modes are enabled, it lets the user feel that they are using a single operating system, since it facilitate each Windows application get its own window. The basic working of these modes is same, except the ways that each program handles the task. These modes not only lets you copy, drag, paste or drop, but also lets you share your folders and apps.

The latest Parallels Desktop 18 for Mac shows much better performance and does so with increased efficiency. It can launch Microsoft Office 80 percent faster and run 3D graphics 15 percent more accurately. Version 18 is ready for the macOS Catalina which is still in beta. Support for additional Catalina features is still in development and will be ready by the time Catalina is released to the public in fall 2019. You will get the updates to macOS Catalina when you purchase or upgrade to the Parallels Desktop 18 for Mac. Till then the new version will continue to support Mojave 10.14, High Sierra 10.13, and Sierra 10.12 but I will advise you to upgrade to macOS Catalina once it comes out so as to fully experience the performance of DirectX 11.

Parallels Desktop have scored good results in the tests, and in some tests VMware Fusion had a narrow win. One of the outstanding feature that can improve the performance is the One-click tuning feature of Parallels Desktop 18. It allows the user to optimize the virtual machine setting and performance to match your requirements.

What is the Overall User Impression?

To better understand the public sentiment regarding the latest version of Parallels Desktop 18 for Mac, I visited a fair number of tech forums and tech communities. The overall public reaction is very positive considering how critical members of such forums generally are about new software releases. The first impression of the Parallels Desktop 18 for Mac is great thanks mainly to the DirectX 11 support as well as the first time use of Apple Metal API. The fact that it is ready for the latest macOS Catalina is an added bonus. According to most users, the DirectX 11 support via Metal API is a huge draw along with added support for Apple Pencil and Sidecar. Users on the forums also praised the visibly improved performance in launching Windows applications and running graphic-intensive games or apps.

However, the fact that the new version 18 has not increased the number of either Virtual RAM or Virtual CPU per VM from the previous version 14 is a bone of contention for a handful of users. Barring these users, there was also some concern about Pro and Business Editions requiring annual subscriptions. Other than these two concerns the vibe on the forums I visited was largely positive and optimistic.

One license per VM

The only way to run Windows on your Mac device without having to restart the device or rebooting into the other OS is to use either the Parallels Desktop 18 for Mac or the VMware Fusion. Now VMware Fusion is a very popular and effective virtualization software which competes directly with the Parallels Desktop 18. Your preference depends on your requirements and your personal choices as both are quite capable of accomplishing what they are supposed to do albeit a few key differences which we will be looking into.

The VMware Fusion supports macOS Mojave 10.14 and is not ready for the soon to be revealed macOS Catalina. This puts Parallels Desktop 18 for Mac firmly at the top as it will support the latest macOS Catalina as and when released to the public.

# Here is a complete Parallels Desktop vs VMware Fusion features comparison from Parallels.

Should You Buy Parallels Desktop 18 for MAC?

If you are looking for the best desktop virtualization software for your Mac computer then the Parallels Desktop 18 for Mac is the thing to buy. It offers the latest features along with DirectX11 support for as low as $79.99. If you already have a licensed Parallels Desktop for Mac, as I did, then you can upgrade for a discounted $49.99. Both the Pro and the Business Editions cost $99.99 per year so choose from those as per your requirements. The features and efficient performance of the new Parallels Desktop 18 for Mac speak for themselves and you need to use it to believe it. You can even try out a free 14-day trial version to make up your mind but I can vouch that you won’t regret the investment.

Softocoupon.com
70% Off Parallels Desktop 18 for MAC
Use Deal