VMware has always been keen on developing a wide range of virtualization tools that can help people working on different platforms to transform their desktop into a dozen of VMs, each with diverse Operating System or hardware configurations. VMware has announced the entry of VMware Workstation 15 to their elegant workstation lineup. VMware has used the up-to-the-minute technologies to develop the leading edge features that can help the professionals to improve their productivity as well as save time to a great extent.

VMware Workstation 15 is built on the latest vSphere Virtual Hardware Platform, which enables users to stay organized with customized network renaming. In the latest version of VMware Workstation, the developers have added support for Windows 10 Fall Creators Update, which is also known as Redstone 3, aside from adding support for Ubuntu 19.04 as well as for Fedora 30. Cortana, the personal digital assistant and the linking capabilities in the new Edge web browser works well with this new product. The user can directly launch VMware Workstation right from Windows 10, with the help of Cortana. The Workstation Virtual Machines Wizard helps the user to install Windows 10 in a very few steps from a disc.

The integrated novel technologies allow the VMware Workstation 15 to maximize the computer’s resources to run today’s most demanding apps in a virtual environment. The ability to allocate multiple processor core, individual graphics memory for each VM, and intelligent partition of main memory (GB’s) lets the user to work wonders in their desktop. The user will be able to create Software Defined Data Center or even run virtual ESXi hosts and vSphere appliances, hassle free.

Compared with the older versions, VMware has improved the speed of graphics up to 36 percent faster, making it possible for the users to visualize data in a whole new dimension. They have solved the video memory problem of previous versions, which caused some hindrance while using graphic-intensive program, such as AutoCAD, Solidworks or Photoshop. The inclusion of new sets of API’s has helped the workstation to handle heavy graphical workloads, without any lag. The added support for DirectX 10.1 and OpenGL 3.3 have boosted the working of 3D applications.

Use Deal
Use Deal
4

The Workstation provides immense opportunity for its users to create more complex network topologies. In addition to the improved IPv6 support, the workstation offers IPv6-to-IPv4 Network Address Translation which makes it possible for the users to build their own virtual network. Creation of custom virtual networking configurations, adding up or removal of IPv6 or IPv4 networks are made easy by the virtual network editor. This creates an ambient virtual environment to test the developer’s application, without changing the PCs network configuration.

Do you wish to extend and scale your virtual machines in the cloud? The Workstation 15 Pro, allows the users to do so with the help of the VMware vSphere and vCloud Air service. This allows the tech geeks to take advantage of the resources beyond the power of a single PC and enjoy maximum flexibility as they can work with local and server-hosted virtual machines, side by side. The Workstation interface offers hassle free connection with the vCloud Air and the user can upload, run, as well as view virtual machines at any instance.

User Interface and Ease of Use 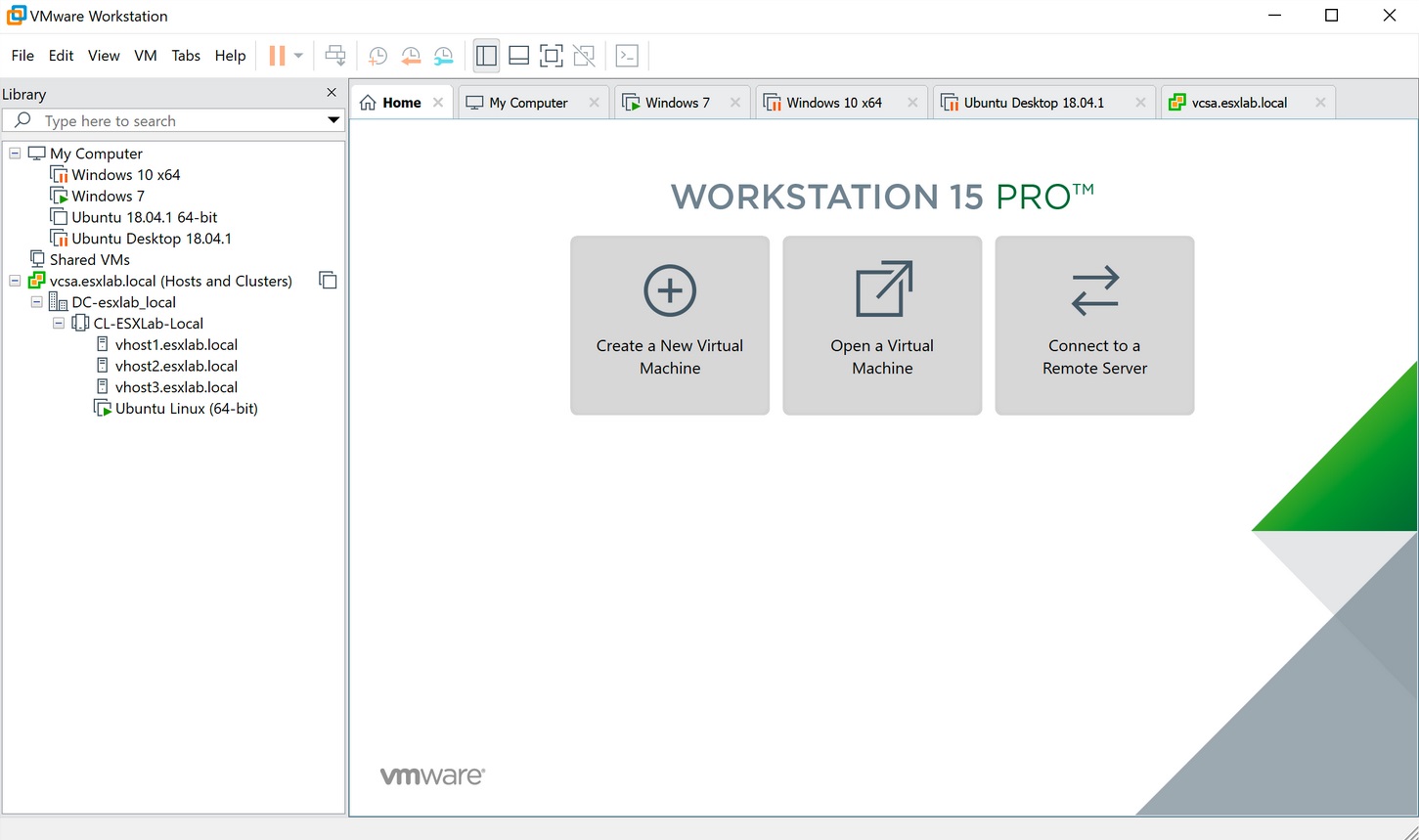 The powerful UI of Workstation lets the techs to have full control over the setup. The user can also select the way to interact with the virtual machine, even you are running it in a cloud or on your PC. The UI is made more interesting by the virtual machine library that lets the user to search and quickly view or access the VM. This indeed serves as a time saving factor.

The easy integration with other VMware products and efficient features have made the Workstation easy to handle. The setup and settings are automatic and can be done in a very few steps. The creation of complex virtual networks is much easy and hassle free.

Workstation virtual tablets sensors combine with latest Intel based tablets and lets the applications running in the virtual machines to respond to the movements of the device. The use of Broadwell and Haswell microarchitecture ensures maximum performance and lets even the resource intense programs to work smoothly.

In addition to these, it is optimized to support high resolution 4K UHD and QHD+, which enables to user to have a clear and detailed view. The workstation can also support multiple monitors on the host with different DPIs.

Run Multiple VMs at Once

The powerful performance exhibited by the VMware Player has won the appreciation of IT professionals. The Player can let you do all the functions, like browsing, sharing files or use USB devices. Even the drag and drop works perfectly in this tool, provided you are using a powerful system with high-end configurations that can meet the demands of two operating systems, running simultaneously on a single device.

Workstation 15 Pro offers enhanced performance even while working with CPU intensive graphic applications. The VMware team has succeeded in improving the performance up to 36% faster, when compared to previous versions. The sophisticated technology used to cancel echo and noise, allows the user to enjoy Skype and Lync VoIP calls within a VM, with much clarity.

The evolution of new technologies has helped the Workstation 15 Pro to create powerful virtual machines that can even run the graphic intensive programs on the virtual environment, without affecting the performance of the machine. This has helped the users to work efficiently, thereby improving their productivity.

VMware Player offers a lot more than any other virtualization tool to its valuable users. It is not only simple and powerful, but also saves you from buying additional hardware to keep your virtual machine secure. With the Player, the user can secure as well as share their complete desktop, which includes all your applications, operating systems and user configurations, in an easy way.

A good observation I have managed to found regarding VMware Workstation 15 Pro and Player concerns a special Academic discount, which can help you to save upto 50% off the regular price, check details here
4

Vmware Workstation Player is a powerful virtualization solution that will enable you to host VMware virtual machines on the computer. It is packed with all the essential tools that can give a great user experience as well as help them to work in a virtual environment without any investment. The VMware Workstation Pro is a feature rich licensed for commercial use virtualization tool that is handy for the professionals to improve their productivity to a great extent. When compared with the capabilities offered by the Workstation, it is worth paying. Even though, VMware Player is not a fully featured application like Workstation Pro, it provides all the essential tools that can meet almost all the needs of a user, who do not wish to invest more on a virtualization app.

No reliance on purpose built OS

Fault Tolerance for supporting up to 4 vCPUs per VM

Use Deal
Use Deal

Microsoft Hyper-V facilitates the users to create and manage virtual computing environments by using a virtualization technology which is built on Windows server. When you install the Hyper-V, it installs all the required components and you may also choose to install some or all of the management tools. Hyper-V Virtual Machine Management, Windows Hypervisor, and virtualization WMI comes along with the application. Other key features and functions of Hyper-V are as follows:

VMware Workstation Vs Hyper V is one of the hottest contentions in the virtualization software market as presently, more or less half of the server workloads are virtualized. Developing and testing your software reactions on your PC without hampering your workflow has now become easier, with the best virtualization applications offering a plethora of useful features. Now you can install encrypted computers for your remove employees and evaluate additional applications or systems in a safe and split setting. When it comes down to choosing between VMware Workstation and Hyper-V, it’s actually tricky and mostly depends on your needs.

Related Deals
We will be happy to hear your thoughts